"Some wish to live within the sound of Church or Chapel bell; I want to run a Rescue Shop within a yard of hell." —C. T. Studd

Charles T. Studd was a servant of Christ who faithfully served His Saviour in China, India, and Africa. As Alfred Buxton in the forward to the book intitled C.T. Studd: Cricketer & Pioneer by Norman Grubb states:

"C. T.'s life stands as some rugged Gibraltar—a sign to all succeeding generations that it is worth while to lose all this world can offer and stake everything on the world to come. His life will be an eternal rebuke to easygoing Christianity. He has demonstrated what it means to follow Christ without counting the cost and without looking back.

As a soldier of the Cross, C. T. is remembered for "his courage in any emergency, his determination never to sound the retreat, his conviction that he was in God's will, his faith that God would see him through, his contempt of the arm of the flesh, and his willingness to risk all for Christ."

Charles Thomas Studd was born in England in 1860, one of three sons of a wealthy retired planter, Edward Studd, who had made a fortune in India and had come back to England to spend it. After being converted to Christ during a Moody-Sankey campaign in England in 1877, Edward Studd became deeply concerned about the spiritual welfare of his three sons and influenced them for the cause of Christ before his death two years later.

By the time C. T. was sixteen he had become an expert cricket player and at nineteen was captain of his team at Eton College. He was further educated at Trinity College, Cambridge where he was also recognized as an outstanding cricketer.

But there followed a period of six years in a backslidden state. C. T. relates: "Instead of going and telling others of the love of Christ, I was selfish and kept the knowledge to myself. The result was that gradually my love began to grow cold, and the love of the world began to come in. I spent six years in that unhappy backslidden state." The Lord in His goodness worked in his life and after a serious illness of his brother and his going to hear D. L. Moody the Lord met C. T. again and restored to him the joy of His salvation.

"Still further, and what was better than all, He set me to work for Him, and I began to try and persuade my friends to read the Gospel, and to speak to them individually about their souls."

"I cannot tell you what joy it gave me to bring the first soul to the Lord Jesus Christ. I have tasted almost all the pleasures that this world can give ... but those pleasures were as nothing compared to the joy that the saving of that one soul gave me."

The Lord continued to work in his life, and led C. T. to go to China. C. T. seeking to comfort his mother wrote: "Mother dear, I do pray God to show you that it is such a privilege to give up a child to be used of God to saving poor sinners who have never even heard of the name of Jesus." C. T. was one of the "Cambridge Seven" who offered themselves to Hudson Taylor for missionary service in the China Inland Mission and in February, 1885, sailed for China. Once there, they followed the early practice of the Mission by living and dressing in Chinese fashion. He and the others began at once to learn the language and to further identify themselves with the nationals by wearing Chinese clothing and eating with them.

It was while in China that C. T. reached the age (25 years old) in which according to his father's will he was to inherit a large sum of money. Through reading God's Word and much prayer, C. T. felt led to give his entire fortune to Christ! "This was not a fool's plunge on his part. It was his public testimony before God and man that he believed God's Word to be the surest thing on earth, and that the hundred fold interest which God has promised in this life, not to speak of the next, is an actual reality for those who believe it and act on it."

Before knowing the exact amount of his inheritance, C.T. sent £5000 to Mr. Moody, another £5000 to George Müller (£4000 to be used on missionary work and £1000 among the orphans); as well as £15,000 pounds to support other worthy ministries. In a few months, he was able to discover the exact amount of his inheritance and he gave some additional thousands away, leaving about £3400 pounds in his possession. 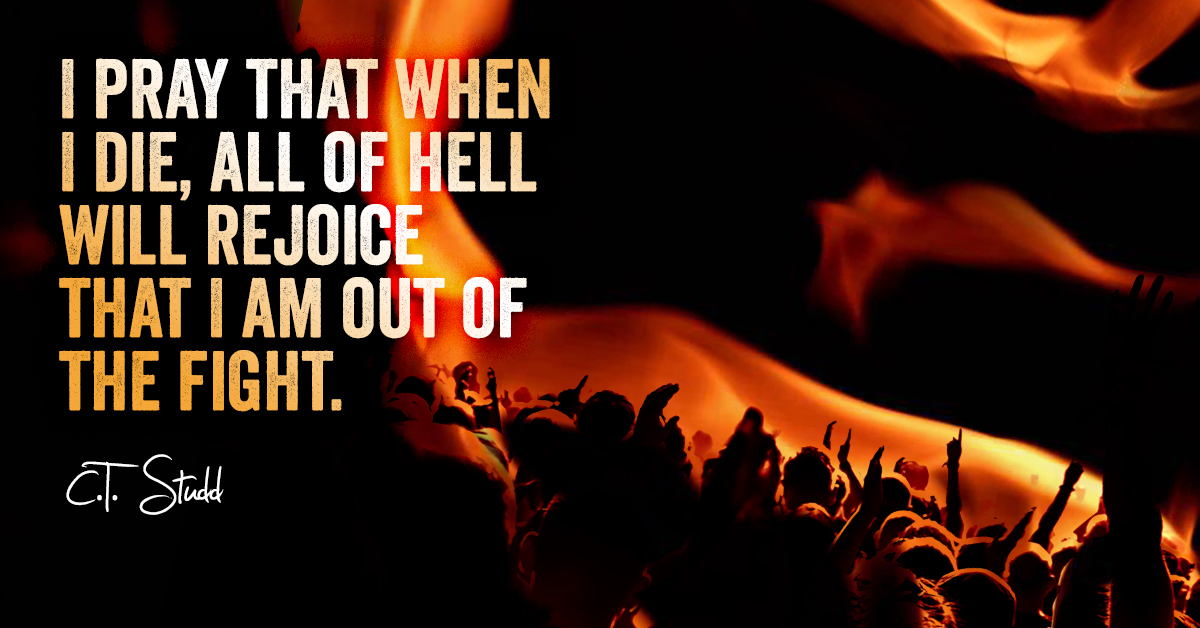 Three years after arriving in China, C. T. married a young Irish missionary from Ulster named Priscilla Livingstone Stewart. Just before the wedding he presented his bride with the remaining money from his inheritance. She, not to be outdone, said, "Charlie, what did the Lord tell the rich young man to do?" "Sell all." "Well then, we will start clear with the Lord at our wedding." And they proceeded to give the rest of the money away for the Lord's work.

They served the Lord together in inland China through many perils and hardships until in 1894 after ten years in China, ill health forced the Studds to return to England, where they turned their property over to the China Inland Mission.

From 1896-1897, C. T. toured American universities in behalf of the newly formed Student Volunteer Movement. C. T. describes one of the meetings at Bucknell College in Pennsylvania:

"Had a splendid student's meeting at 6:30. The Lord was greatly with us. After some hymns and a prayer, I spoke for about 30 minutes; then all got on knees, and one after another gave themselves to God in such sentences as 'Lord, take me as I am,' 'I will go with Thee, Lord Jesus.' There must have been a score of them. Oh, surely that is the sweetest music that can ever be heard by any ears, and if sweet to us, how much sweeter to Jesus. Afterwards I got them to sing a hymn:

"The cleansing blood I see, I see,
I plunge, and oh, it cleanseth me."

In 1900 the Studd family went to South India where C. T. served as a pastor of a church in Ootacamund for six years. From the time of his conversion, C. T. had felt the responsibility upon their family to take the Gospel to India.

China, then India, and now the heart of Africa. After their return home to England in 1906, C. T. was stirred by the need for missionary pioneer work in Central Africa. But again the path was not without obstacles. Penniless, turned down by the doctor, dropped by a Committee of businessmen who had agreed to support him, yet told by God to go, once more C. T. staked all on obedience to God. As a young man he staked his career, in China he staked his fortune, now he staked his life. His answer to the Committee was; "Gentlemen, God has called me to go, and I will go. I will blaze the trail, though my grave may only become a stepping stone that younger men may follow." Leaving his wife and four daughters in England, C. T. sailed, contrary to medical advice, for the heart of Africa in 1910, where he continued to work until his death in 1931.

C. T. bore much fruit for the Saviour while in Africa as he endured weakness and sickness; loosing most of his teeth and suffering several heart attacks; but he endured hardness as a good soldier of the Lord Jesus Christ! In a letter home, C. T. gave a last backward look at the outstanding events of his life:

"As I believe I am now nearing my departure from this world, I have but a few things to rejoice in; they are these:

My only joys therefore are that when God has given me a work to do, I have not refused it."

Shortly after 10:30 p.m. on a July day in 1931, C. T. Studd went home to be with His Lord whom he had loved so dearly and served so faithfully! The last word he spoke was "Hallelujah"!