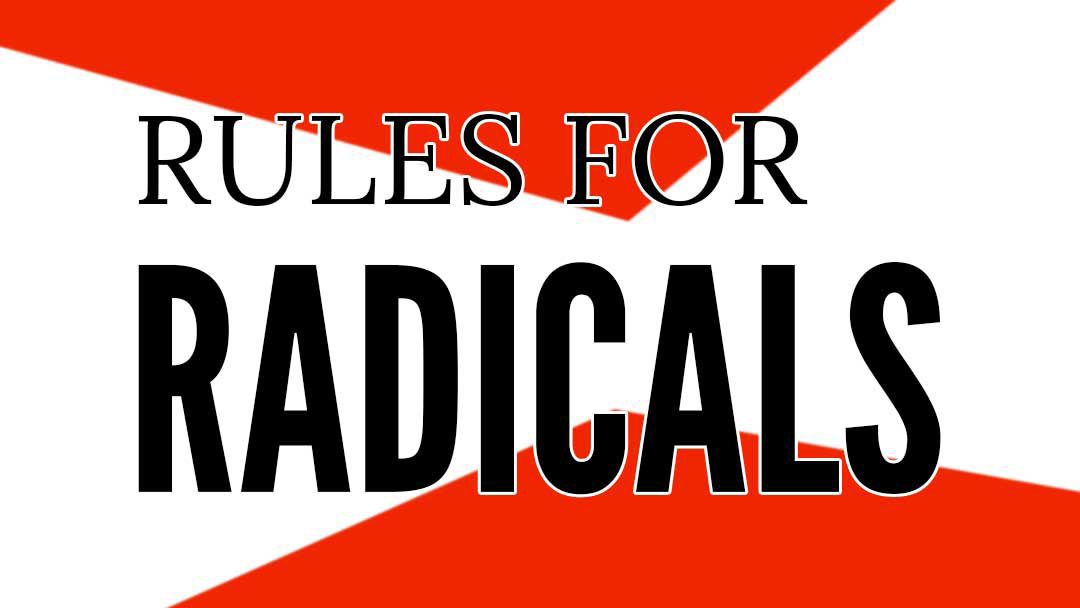 Rules for Radicals: A Pragmatic Primer for Realistic Radicals

1. “Power is not only what you have, but what the enemy thinks you have.” Power is derived from 2 main sources – money and people. “Have-Nots” must build power from flesh and blood.

2. “Never go outside the expertise of your people.” It results in confusion, fear and retreat. Feeling secure adds to the backbone of anyone.

3. “Whenever possible, go outside the expertise of the enemy.” Look for ways to increase insecurity, anxiety and uncertainty.

4. “Make the enemy live up to its own book of rules.” If the rule is that every letter gets a reply, send 30,000 letters. You can kill them with this because no one can possibly obey all of their own rules.

5. “Ridicule is man’s most potent weapon.” There is no defense. It’s irrational. It’s infuriating. It also works as a key pressure point to force the enemy into concessions.

6. “A good tactic is one your people enjoy.” They’ll keep doing it without urging and come back to do more. They’re doing their thing, and will even suggest better ones.

7. “A tactic that drags on too long becomes a drag.” Don’t become old news.

8. “Keep the pressure on. Never let up.” Keep trying new things to keep the opposition off balance. As the opposition masters one approach, hit them from the flank with something new.

9. “The threat is usually more terrifying than the thing itself.” Imagination and ego can dream up many more consequences than any activist.

10. “The major premise for tactics is the development of operations that will maintain a constant pressure upon the opposition.” It is this unceasing pressure that results in the reactions from the opposition that are essential for the success of the campaign.

11. “If you push a negative hard enough, it will push through and become a positive.” Violence from the other side can win the public to your side because the public sympathizes with the underdog.

12. “The price of a successful attack is a constructive alternative.” Never let the enemy score points because you’re caught without a solution to the problem.

13. “Pick the target, freeze it, personalize it, and polarize it.” Cut off the support network and isolate the target from sympathy. Go after people and not institutions; people hurt faster than institutions.

Saul David Alinsky died before the election of Barack Hussein Obama II and Hilary Clinton’s attempt at the presidency. Both ardent admirers of Alinsky. Spoken of by many as a servant of the devil, an “American Joseph Goebbels,” and “dangerous harbinger of insurrection,” Alinsky developed a reputation for insidiousness that may have exceeded his influence, considerable though it may be.

One of three epigraphs on an introductory page of Saul Alinsky’s Rules for Radicals characterizes Lucifer as the “first radical known to man who rebelled against the establishment and did it so effectively that he at least won his own kingdom.”

“Lest we forget at least an over-the-shoulder acknowledgment to the very first radical: from all our legends, mythology, and history (and who is to know where mythology leaves off and history begins — or which is which), the first radical known to man who rebelled against the establishment and did it so effectively that he at least won his own kingdom — Lucifer.”